The Worlds of Love 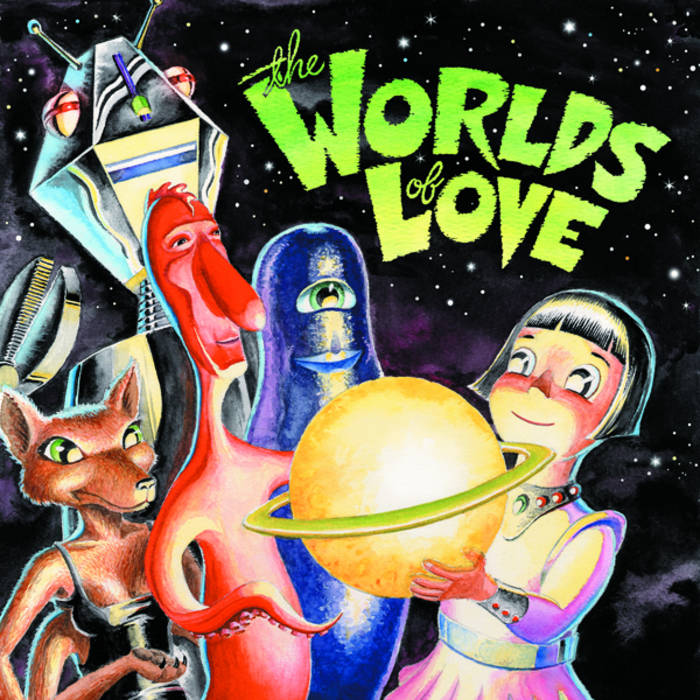 The Worlds of Love was formed as a collaborative project, dedicated to performing love songs and improvised pieces that bridge the gap between chaos and romance (is there a gap?). Together, The Worlds of Love creates a new kind of romantic music, one in which lovely melodies meet raucous noise, hand-played drum machines meet banjo and synthesizer, fragile sopranos meet blustery baritone, and boy meets girl.

Most of the songs on this album are Worlds of Love originals, but we were inspired by Jo Stafford to record “You Belong to Me,” and by Francoise Hardy to record two of her songs, “In The Sky” and “Et Meme,” as a medley.
Boy/Girl, Boy/Boy, Girl/Girl, Parent/Child, Person/Place, etc. There are many worlds of love, and these are but a few of them.

The Worlds of Love was dormant after Cinnie moved from New York to San Francisco, but this reissue inspired The Worlds to resume. Ikue and I got together, but Cinnie could join us only as a virtual banjo player. Her spirit and sound had to be part of the World(s).

In his 1981 novel The Divine Invasion, Philip K. Dick writes of a singer of the future who adapts the 16th Century lute songs of John Dowland, and sings them throughout the galaxy to the accompaniment of a “vibrolute.” The song “Slippers On” adapts phrases by Dick and Dowland (to vibrolute accompaniment), and is an homage to those compassionate visionaries.

In 1993 my CD “I Guess I Just Wasn’t Made for These Times—David Garland performs Brian Wilson” was released in Japan. That project grew out of The Worlds of Love, and Cinnie and Ikue contributed a lot to it. “Don’t Talk” was released on that CD with my vocal, but Ikue’s beautiful version is included here.
—David Garland